A step-cut diamond with 70 or 66 facets, the Radiant is squarish or rectangular, and features straight sides and cut-off corners. Its brilliance can be compared with that of a Round Brilliant, which is unsurprising in that it employs a similar facet pattern to the world’s most popular shape on both its crown and pavilion.

While widely referred to as the Radiant Cut in the trade, on diamond grading reports it is generally described as a Cut-Cornered Square or a Rectangular Brilliant, depending on its length to width ratio. This because the both cut and the name are patented.

The Radiant Cut is of relatively recent vintage, having been created by a New York diamond polisher, Henry Grossbard, in 1977, and named after his company. Describing his creative process almost 30 years later, he recalled that at the time the Emerald Cut had fallen out of favor because it was said to lack brilliance. He consequently set out to design a square or rectangular shape that captured the reflections that are the essence of the round or brilliant cut, and would be especially suited to high-clarity goods.

The result was a hybrid cut, which combined the straight sides, step-cut and cut-off corners of the Emerald Cut, with the facet patterns of the Round Brilliant. It is considered to bridge the gap between the Cushion Cut and the Princess Cut.

The Radiant Cut’s design creates a kaleidoscope effect that the developers called crushed ice. Grossbard explained that this was made possible by rotating the faceting, so that the culet was not formed by facets from the side of the stone, but rather from the corners. It resulted in a flatter pavilion, providing increased brilliance. Square-shaped Radiants have length to width ratios of between 1.00 and 1.05 while rectangular Radiants can have ratios from over 1.05 anywhere up to 1.50.

As is the case with numerous elongated polished diamonds, rectangular radiant cut diamonds often display a bow-tie effect, ranging from near invisible to quite severe. 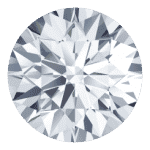 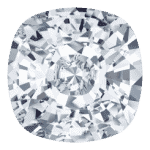